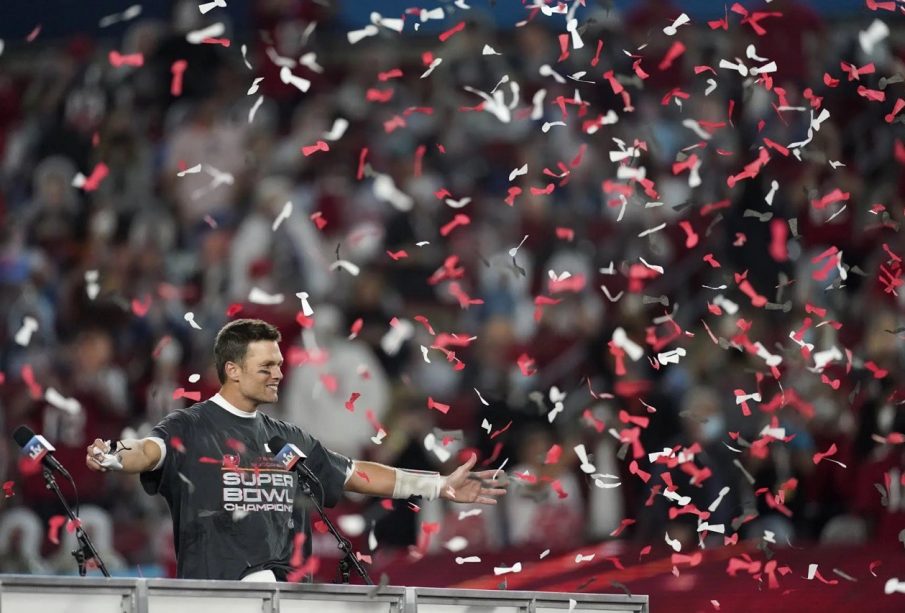 Elite quarter back Tom Brady helped lead his team to victory on Sunday with the Buccaneer’s 31-9 dominance over the Kansas City Chiefs.

Brady executed 21 out of 29 passes for 201 yards with three touchdowns.

For his performance in the game, he was honored as the games Most Valuable Player (MVP). Brady, 43 is also the first player who is over 40-years-old to win Championship Game/Series MVP in any of the four major North American profession sports leagues (NFL, NBA, NHL, MLB).

Brady’s wife Gisele Bundchen who attended the game with her two children with Brady, Benjamin, 11 and Vivian, 8 was on hand to congratulate her husband after his win.

Also prescent was Brady’ son, 13-year-old Jack that he shares with his ex-wife Bridget Moynahan.

Moynahan, 49 with whom Brady was previously together with for two years between 2004 and 2006, posted a message of congratulations to Brady after his victory.

“I am pretty sure I am not the only one from #patriotsnation celebrating @buccaneers’ she wrote.

She only found out she was pregnant with Jack when Brady had started dating Bundchen. Although Moynahan concedes that the situation wasn’t always easy for both women.

In her memoirs, “Lessons: My Path to a Meaningful Life” Bundchen wrote: “Two months into our relationship, Tom told me that his ex-girlfriend was pregnant. The very next day the news was everywhere, and I felt my world had been turned upside down.”

“It wasn’t the ideal situation for anyone – there’s no manual to prepare you for that … But I’m so grateful for (Bridget) .. I know this was hard, but I couldn’t imagine my life without (Jack) I call him my bonus child.

And Moynahan also seems happy with the way things panned out.

In 2011 the actress spoke to More Magazine and said:

“My son has two loving parents and an extended family, whether it’s cousins or stepmothers or boyfriends. My son is surrounded by love.”

Ahead of Super Bowl 2021 both women posted supportive messages to Brady, who joined the Buccaneers last March and went on to celebrate his first win as a Buccaneer.

Previously he had played 20 seasons with the Patriots.

Brady no doubt delighted fans when he crushed any plans of retiring in the near future.

How Tom Brady stays in top shape at 43