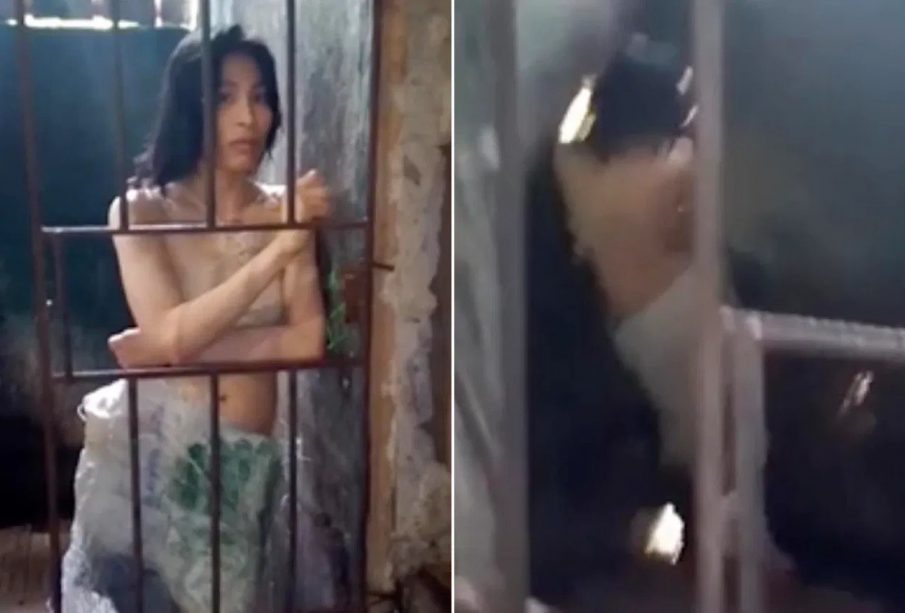 Bebe, 29 was diagnosed with psychotic depression in 2014. She suffered from hallucinations and was admitted to a psychiatric unit at a hospital in the Negros Occidental province.

Her condition improved and she was able to return home however in 2015 when her father became sick the family could no longer afford the medical bills for Bebe’s ongoing treatment.

Without the medications necessary to control her illness and the symptoms it unleashed her hallucinations and depressive episodes returned.

A family friend has said that there were periods of time when Bebe became so violent and uncontrollable that her family were forced to confine her for her own safety.

‘Sometimes Bebe would throw things at neighbors, or wander outside the house and start riding the bus,’ Glyzel Bullos recalled. ‘There was one time her family were looking for her and found her a week later in Cebu province when the police contacted them,’ she said.

To ensure Bebe’s and other’s safety and in an effort to prevent her wandering away, her family built her a small cage inside their house.

Bebe is passed food through the bars of her cell. She is dressed in threadbare rags.

Glyzel explained that; ‘She munches on her dress until they are tattered, so they dress her in sacks because she doesn’t like eating them.’

Glyzel also makes it clear that Bebe’s parents under the circumstances are doing the best they can. ‘They are locking her up so she won’t hurt herself, and not because they don’t love her,’ she said.

Bebe had aspirations of becoming a professional model before mental illness took over her life.

Glyzel is now appealing for funds to be able to send Bebe back to hospital to obtain treatment. ‘Medical services are expensive, especially a private medical institution,’ she said. ‘I hope there are people who could help us bring Bebe back to her past self.’

New vaccines are on the way says Fauci..possible approval ‘weeks away.’