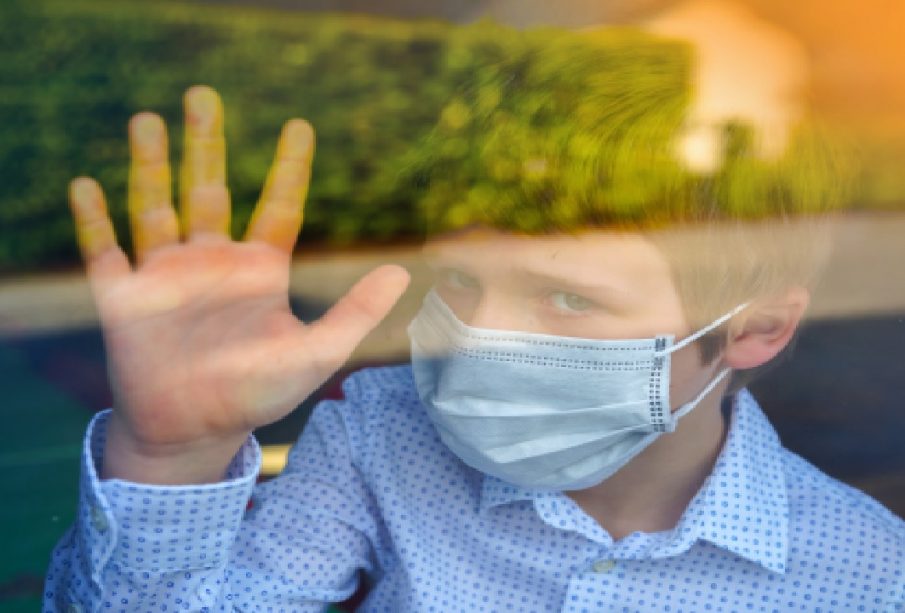 Children all over the world are suffering from the measures taken to control Covid-19.

According to a United Kingdom (UK) study it’s not so much their education that is being compromised, it’s their mental health.

The report substantiates that the pandemic not only compounds existing mental health issues among children but is also contributing to long-term damage to the health and well-being of hundreds of thousands of young people who previously displayed no signs of mental disorders.

One in six young people are now said to suffer from a probable mental illness which has increased up from one in nine before the advent of coronavirus and the ongoing, drastic restrictions it has unleashed.

Confinement is viewed as a necessary measure during outbreaks of significant diseases however it can have a far-reaching and deleterious psychological impact in the populations subjected to the isolation and this of course includes children who may be the most long-term affected recipients of enforced lockdowns.

When today’s youth reached adulthood, will they define and label themselves as ‘The Lockdown Generation’ – whose destinies and characteristics intrinsically changed with the advent of the pandemic?

Social interaction is important for people of all ages. Enforced lockdowns have meant that children cannot go to school, play sport or see their friends and extended family. This lack of contact has had a huge detrimental effect on the normal development of young people.

“Young people already face significant challenges at this stage in their lives,” says Whitney Crenna-Jennings, author of the report and senior researcher at the Education Policy Institute (EPI).

“But this generation have also had to deal with a pandemic that will have starved them of the vital relationships and experiences needed to support their journey through adolescence.”

“If we fail to counter the ill-effects of this crisis on young people’s health and development, there is a real risk that it inflicts irreversible damage on their later life chances.”

Concerned parents are also alarmed at the effects the drawn out pandemic is having on their offspring.

Their top concerns have been noted as – 49% their child not being able to see their friends and lack of socialization, with 45% worried over their child’s mental health.

In comparison only 30% were worried about their child falling behind in their education, according to the survey by Parentkind.

Children are enthusiastic social learners, developing skills such as conflict solutions, empathy and sharing at a swift pace. The majority of children have already attended nursery schools and kindergarten before they start school, so that even in the absence of siblings their social and emotional cognition has already started to develop.

Brain development begins shortly after conception, and continues through to young adulthood. It is formed by a complex interplay between environment and genes. There is evidence of critical periods in brain development such as adolescence, when it comes to social cognition.

However social cognitive development begins in the first year of life. Children begin to develop ‘theory of mind’ – the understanding of what others are thinking which continues to develop through to age five. Playtime is a vital part of this process, as it involves physical contact and development of friendships which help children to cope with an array of emotions and stay mentally strong.

During the coronavirus lockdowns the majority of opportunities for social learning have been eroded.

Researchers are still grappling with the full long term side effects in which lockdowns will affect children due to reduced and delayed social interactions.

Reports have shown that some adult’s social cognition has been affected by the Covid-19 lockdowns. Studies have shown that people have experienced a huge reduction in positive feelings which was significantly connected to the lack of social connection enforced on them.

It is then surmisable, that children are even more vulnerable when it comes to long term effects of a delay or absence in peer-to-peer interaction.

Social brain development is in effect a two-way street – the environment, referred to in this instance as social interaction between peers, affects the brain and the brain in turn affects the emotional and behavioural response to peers.

Social cognition is imperative to achieve success in school, work and social environments and also in regards to “hot cognition” which is essentially overall emotional reasoning.

Cognition is in fact a building block that is required for “cold cognition” which involves skills such as attention, planning and problem solving.

It has been previously proven that children with higher social cognition do better in secondary school.

The fact is if children are unable to indulge in creative playtime with other children, learning the art of compromise, developing empathy for others and how to manage their emotions, language development and social communication are also likely to be severely afflicted.

Online learning is not the same as being in a classroom with other children. Children are suffering from the effects of isolation, as a computer screen is no comparison for real life interaction.

Even relatively brief periods of time out of education can have a lasting impact on a child’s development. The most serious consequence is that when schools are closed for long periods, many children will begin to forget when they already have learnt, a regression which will be much more challenging to remedy

Loneliness is well known for being detrimental to physical and mental health wellbeing and this includes children.

Many children from poorer backgrounds or whose parents are suffering financial constraints as a result of the restrictions imposed by the pandemic, don’t have online facilities to help them to learn and socialize.

Marta Cohen, head of histopathology at Sheffield Children’s Hospital, in the U.K has stated that more than two million children are living without the advantage of at least maintaining an online connection with those their own age.

“During the first wave the schools were closed and that had an impact on more than just the education of the children,” Cohen told CGTN.

The situation is compounded for children who have difficult family circumstances.

“Anxiety has increased and this is a short term and a long term problem. There will be an effect if the child has been sick, or lost a parent, or one of the parents becomes very sick – it will cause or may cause post-traumatic stress and it seems that suicides in adolescents have increased.

“Many children are in vulnerable families, parents are either alcoholics or addicted to drugs, or exposed to child abuse, domestic violence, or everything combined”

“There are more than two million children in this situation, so obviously this has a high impact because it’s going to be very difficult for those children to recover after not being able to go to school and having a lack of structure in their lives. They could have low confidence and maybe exposed to behavioural issues and domestic violence.”

Cohen also emphasis’s that many abusers have also been subjected to abuse in the past and this is a fear for the future.

“It is the next generation and we really need to care for them (the children) because we don’t want children who are uneducated who are victims of abuse,” she said.

Ongoing isolation, financial stress, loss of work and other factors compounded by the pandemic can be intensified in a a lockdown home situation and some children are extremely vulnerable in becoming the punching bags of their parents or carers frustrations.

For many children home never was a safe place to be, or has now become sinister due to the stresses resulting from Covid-19.

Child protection organizations have reported a growing demand for their services. Kids Helpline (Australia) received “26,500 calls – approximately one a minute – in the first three weeks of April, 2020”

Another report from Bangladesh noted that in the same period a 42% increased beatings dealt out by parents and guardians. A 40% increase in calls to the child help line and 50% of interviewees reporting that the security and safety of girls was an issue in the lockdown.

Some parents have resorted to marrying off girl children as a result of the debilitating economic fallout triggered by Covid-19.

In Ethiopia alone authorities stopped 540 child marriages in the first two months of the lockdown.

Enforced restricted movement during lockdown makes it more difficult for survivors to report abuse and hinders their ability to seek help.

It is vital that ways are found to control growing violence against children in the ongoing pandemic to minimize a pandemic of abuse that many children will emulate themselves as abusers in adulthood.

Children are generally experiencing greater amounts of stress during the Pandemic. They are feeling the effects of stress from online schoolwork, their future, their health and those of their family and in families who have experienced financial loss due to the virus the children can take on stress over their existential needs.

While young people have a very low risk of developing serious illness’ from Covid-19, children still feel stressed over the absence of sport and activities in their life. Boys in particular reported experiencing stress in regards to their health and being unable to participate in sports or physical exercise.

‘I used to train in soccer eight hours per week and then we would play competition soccer on the weekend, now it’s not allowed and I feel unfit and depressed and miss my teammates’ Boy, 15.

‘We live in a small apartment and there is really no spare space to move around in. I used to play hockey and swim and go running with my friends, now I do nothing and the longer I do nothing the more depressed and lethargic I feel,’ Boy, 13.

Most children report differing degrees of ‘feeling trapped,’ ‘being locked up’ and ‘feeling stuck’ during lockdown.

‘I feel as though it is all a bad dream, but then I wake up and it starts all over again, I feel trapped, I want to scream, but I can’t nothing seems to change no end in sight only an ongoing black hole with no future,’ Girl, 15.

‘My life is racing by stuck at home hearing my parents argue about money, I just feel like not being here anymore,’ Girl, 17.

A June 2020 survey showed that one in four children were feeling stressed about the future or finding a job. The proportion of young people reporting stress related to jobs and the future increased with age with over half of those polled (53%) being 17-year-olds.

Lockdowns and their restrictive effects are expected to cause negative repercussions for many more years to come with children from more ‘disadvantaged’ situations bearing the brunt of the pandemic’s confinement long -term side effects.

There is no easy solution to the problem as governments scramble to contain infection for their weary citizens and in some countries lockdowns are continually repeated in an effort to contain outbreaks of the virus making many children as well as adults feel that there is no end in sight to their restricted lives.

It is too soon to know for sure how the children of today will develop into the adults of tomorrow, but the Pandemic’s debilitating side effects like any long term negative influence will surely to some extent affect a great number of todays ‘Lockdown Generation.’