13 Gorillas at Atlanta zoo have tested positive for COVID-19 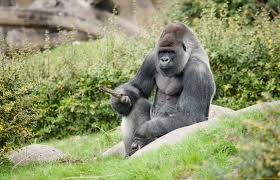 Atlanta zoo employees discovered that the animals were infected with coronavirus after testing them when they exhibited classic symptoms associated with COVID-19.

The gorillas had been suffering from runny noses, lack of appetite and coughing. One of the gorillas named Ozzie, is currently the world’s oldest living male gorilla at 60 years of age.

“The teams are very closely monitoring the affected gorillas and are hopeful they will make a complete recovery,” stated Sam Rivera, DVM, Senior Director of Animal Health.

“They are receiving the best possible care, and we are prepared to provide additional supportive care should it become necessary.”

“We are very concerned that these infections occurred, especially given that safety protocols when working with great apes and other susceptible animal species are, and throughout the pandemic have been, extremely rigorous.”

The zoo reports that it is treating the gorillas at risk of developing complications from the virus with monoclonal antibodies, as well as testing all 20 of its gorillas, who dwell in four troops.

It is believed that an asymptomatic employee who cares for the gorillas passed on the virus. This occurred even though the worker had been fully vaccinated and was wearing suitable, protective equipment including gloves and wearing a mask.

The zoo has stated that there’s no evidence that the virus can be passed from the gorillas to humans, pointing out that visitors to the zoo are too far away to be infected by the gorillas.

Rivera told The Atlanta Journal-Constitution that Atlanta’s afflicted gorillas seem to be the second group of great apes to be infected with the potentially deadly virus.

Eight gorillas at the San Diego Zoo Safari Park were previously treated for the virus in January.

All eight gorillas made a full recovery.

Dreaming a lot could lower your risk of developing dementia