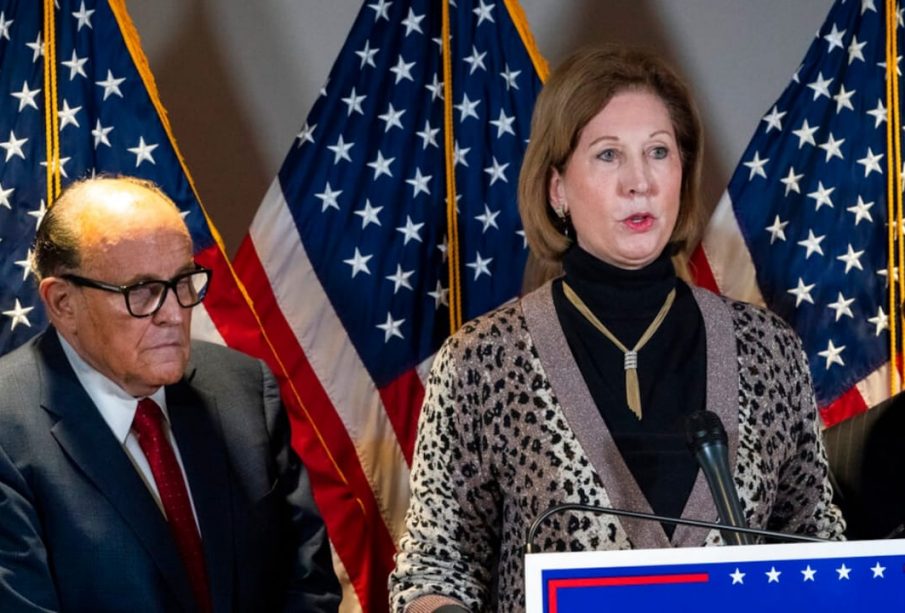 President Donald Trump’s legal team have officially cut ties with attorney Sidney Powell. ‘Sidney Powell is practicing law on her own’ announced Trump campaign lawyers Jenna Ellis and Rudy Giuliani in a statement on Sunday. ‘She is not a member of the Trump legal team. She is also not a lawyer for the president in his personal capacity.’

Powell’s dismissal from Trump’s ‘truly great team’ as he twittered on November 14th, comes after Powell made baseless accusations of voter fraud at a campaign news conference on Thursday. Previously Trump was enthusiastic regarding the lawyers selected in his bid to overturn the presidential election based on what he and his team have alluded to as yet unsubstantiated ‘fraud.’

I look forward to Mayor Giuliani spearheading the legal effort to defend OUR RIGHT to FREE and FAIR ELECTIONS! Rudy Giuliani, Joseph diGenova, Victoria Toensing, Sidney Powell, and Jenna Ellis, a truly great team, added to our other wonderful lawyers and representatives!

Powell has claimed -without providing evidence, that electronic voting systems had switched millions of ballots in favor of Biden At last Thursday’s frenzied press conference she described a vast, insidious put involving the Venezuelan government and the financier George Soros to steal the election from President Trump. Powell has been vocal in alleging that the 2020 election voter fraud was masterminded by votes cast through machines from Dominion Voting Systems, which she claims had been altered to go to Biden instead of Trump. In Thursday’s press conference she stated that Trump had won the election by a ‘landslide’ but had been cheated by an ‘algorithm’ designed by Dominion Voting Systems. She also went on say that the fraud was carried out at the behest of billionaire Democrat George Soros, the Clinton Foundation, communists from Venezuela, Cuba, China and corrupt election officials.

"We will not be intimidated…We are going to clean this mess up now. President Trump won by a landslide. We are going to prove it. And we are going to reclaim the United States of America for the people who vote for freedom."—Sidney Powell pic.twitter.com/8KCEOGuL7w

This accusation has been totally refuted by Dominion spokesperson Michael Steel who says he identifies as a conservative Republican. He told Fox News on Sunday, that Dominion would ‘love to see any facts or evidence’ that the Trump campaign has to substantiate their accusations of fraud but ‘thus far’ he said the company ‘has seen none.’ Steel says that what Powell claims happened regarding alleges of vote switching could never have occurred. ‘Well it’s physically impossible.’ he said. ‘Look, when a voter votes on a Dominion machine, they fill out a ballot on a touch screen. They are given a printed copy which they then give to a local election official for safekeeping….If any electronic interference had taken place, the tally reported electronically would not match the printed ballots. And in every case where we’ve looked at – in George, all across the country – the printed ballot, the gold standard in election security, has matched the electronic tally.’

Powell has so far failed to provide any evidence to back up these claims although she previously said she would be presenting evidence by the end of this week. Powell also told host Greg Kelly that she was in possession of an affidavit from a former high-ranking Venezuelan military officer, which she said confirms that Dominions machines were created in Venezuela at the direction of the late Hugo Chavez to ensure he never lost an election. ‘So don’t tell me there is no evidence of significant fraud across multiple states that cases into question the validity of elections in every swing state.’ she said. Fox New’s Conservative commentator Tucker Carlson also had no luck in extracting information relating to substantiating any of Powells claims saying ‘When we kept pressing, she got angry and told us to stop contacting her,’ Carlson said on Thursday. Powell responded by saying she had declined to provide the host with evidence because he was ‘very insulting, demanding and rude.’

Trump’s legal team including Powell have so far failed to produce any consequential wins. The clock is ticking and while Trump and his team (minus Powell) work on their next legal move, Biden who is due to take office on January 20 has already begun to plan his inauguration.

Australian airline Qantas will only accept passengers who have been vaccinated