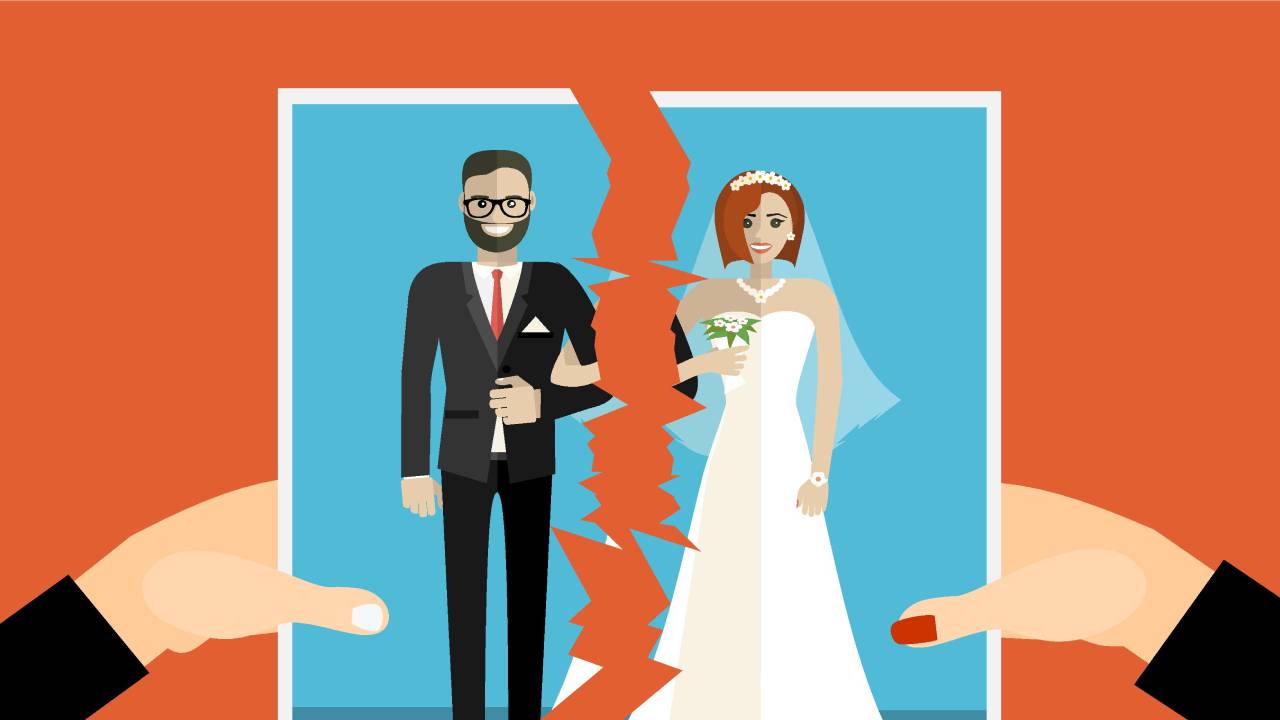 The fairytale of a white wedding to the prince of your dreams has a high failure rate of almost 50% in the United States. Researchers estimate that 41% of all first marriages end with the number increasing to 60% for second marriages and jumping to 73% for marriage number three. People that are game enough to marry more than that significantly increase their chances of the relationship breaking down with each subsequent ‘I do’ they are brave enough to utter.

Why do people even bother to get married?

Society has compelled the majority of us to believe that marriage is the ultimate romantic and practical union, followed shortly after by having children (portrayed as adding to the bliss) whose addition to the family actually increases the chances of separation. It has been found that relationship satisfaction is at its highest before a couple has children and then if they manage to stay together, after the children have left home. The family dream would not be complete without the pressure to purchase a property, (dream home) the right car and the trappings of all the embellishments required to deem the fabrication of the ‘perfect couple.’ The financial constraints to achieve and maintain these aspirations can add more stress on top of a screaming baby and the dawning revelation that the romanticization of eternal coupledom is overrated.

Marriage is not an easy gig. The initial throes of infatuation can wither and fade as the realities of every day living day in and out with the same person take their toll. Your perceived aura of your soulmate that was once thought to be faultless or endearing starts to erode and those habits that were originally ignored start driving you crazy.

Divorce is not the end.. it can be a new beginning

Often people stay together as the relationship breaks down. Sometimes for many years. Sometimes for ever. They stay even when there is nothing of value left to salvage. When they can barely stand one another, realize they never had anything in common, their values are different, they are bored out of their minds and even when they are being abused, controlled or become chronically sick from being with the wrong person. Some stay for ‘the sake of the children’ thinking it is better for a child to be subject to the derision that two people feel for each other than to be with one parent fearing it will damage the child, however your child can sense when you are not happy and this in itself is damaging.

A Princeton university study found that children of parents in unhappy marriages were far less likely to experience divorce themselves if their parents divorced. If your children witness you being belittled, depressed and not living your best life because you are staying put with a partner you despise, who is beating you, who does not value you, talk to you or controls you, this only teaches them what a relationship is and what to expect from one. Children learn from our example. We can also be embarrassed to let everyone down especially family and friends when a relationship is in tatters and needs to be abandoned. The fact is it has nothing to do with what other people think and if you lose some contacts in the process, they were never worth having in the first place. Everyone deserves to be happy and if you are in an unhappy and unfulfilling marriage it can feel like a death sentence but it doesn’t have to be.

Every change in life no matter good or bad is the start of something new. If you have resolutely come to the conclusion that your marriage is not salvageable what are you waiting for, don’t let fear of the unknown stop you from living a life you no longer want. It could be the beginning of a new chapter that could lead to a better life, a new relationship, greater independence and the freedom to live your life on your terms.

Being in a bad marriage can make you sick

Being in a bad relationship is a lot of ongoing stress. Stress is very bad for our health and can lead to chronic illness and even life threatening diseases such as cancer and heart disease.

Research has found that ongoing conflict can lead to damaging responses in the body such as inflammation, changes in appetite and increased release of stress hormones, all of which can affect numerous aspects of health ranging from heart function to the immune system. Frequent fighting over many years will take its toll. According to a study conducted by researchers at the Universities of Michigan and Nevada, the consequent stress from being in a toxic marriage may even be as bad for you as smoking. Further a marriage which involves physical and emotional abuse can result in psychological manifestations of low self esteem, anxiety, depression and even suicide. People who feel protective of their abusive partner and feel the need to conceal to the outside world the reality of the relationship can experience feelings of loneliness and isolation.

Although studies also show that happy marriages can offer health benefits, conflict ridden ones that result in unhappiness, frustration and bouts of anger or violence are profoundly detrimental to our physical and mental health, and the longer we endure these conditions the more we put ourselves at risk.

Should you go or should you stay?

Sometimes when you are in a bad relationship it can be hard to work out if it’s worth trying to repair the connection you had with the person you once committed your life to or face the reality that you are living a charade that you can no longer accept and go along with.

It takes courage to make a choice and give up on the illusion that marriage is a sacred union until death do us part, but if you feel like you are gradually dying inside and losing yourself in the process it is time to ditch the fairytale and be your own prince in order to save yourself from wasting anymore of your precious life. There are signs that can help you assess if the relationship is over.

What is an unhealthy marriage?

An unhealthy marriage that is failing will display certain types of behaviors that you can objectively analyze to see if you are willing to keep fueling it. These tell tale signs develop over time.

We learn to live with a little less every day until we realize that our former connection with our partner has faded to a shadow. The following are some negative patterns that if we recognize in our marriage we should perhaps take heed of and end it before the acrimony turns ugly, dangerous or sucks the life out of us.

Signs of a marriage in free fall

1. Criticism is a common form of communication. If we are constantly criticizing or being criticized by someone who is supposed to support us it is obvious that any empathy or support that we once garnered from our partner is long gone.

2. Someone in the relationship always feels as though they are being attacked. Defensive behavior is common.

3. You fantasize about having a different kind of life where your partner is not in it. When you are apart you feel like you can breathe, your health improves, you feel like your true self. Being together is like a boring and painful facade, something that just is, not an uplifting experience.

4. You are completely exhausted, sick, suffer chronic headaches, body aches, have trouble sleeping, feel depressed, anxious or are scared of your partner. You avoid telling them things that could upset them as you do not want to be physically or emotionally abused. You go along with what they say, what they demand, or what they want in order to avoid the repercussions of their reactions.

5. Communication has stopped. You know any conversation is likely to end in a fight so you just avoid it altogether.

6. You are bored beyond belief. You have nothing in common with your partner. You feel like your life is passing you by and you are making do with a stranger who does not understand you.

7. Your partner is controlling. You feel like your confidence and independence that you once cherished has been eroded until only a shell of what you once were remains. You allow the control because you are worn down, wish to avert conflict by making a stand, are scared of your partner or used to the status quo.

8. Your partner has had an affair/numerous affairs. There is obviously something amiss in a relationship when cheating occurs. If the dalliance is a one off occurrence it can sometimes be forgiven however if there are constant bouts of philandering behavior accompanied by lies it is necessary to consider if you really want to put up with a person who devalues you in this way.

Delaying the inevitable in life is ultimately more painful than letting it go. There is a huge relief to finally making any decision including the decision to end a ship wreck of a marriage you were trying to sail for so long. When you finally let go of something that is no longer serving your best interests, you allow room for positive developments to take its place.

Many people have reported the cessation of nagging, chronic illness’s after leaving a marriage where they felt worthless, depressed and trapped. Many go on to carve new careers, find another love, achieve great goals, gain the independence they lost and be better parents to their children when they are no longer fixated on the pain their relationship caused them and are finally able to focus on themselves and what fulfills them, living in the moment and finally discarding the detrimental emotions that plagued them as their white wedding dream turned black.

Letting go of a relationship we have put time, effort and all our dreams into is not easy to relinquish. We don’t want to easily give up on something we once viewed as a perfect once in a lifetime match made in heaven, but sometimes we need to part with the one we thought completed us so we don’t lose ourselves completely before it’s too late.