Quarantining in Turkey during unprecedented fires 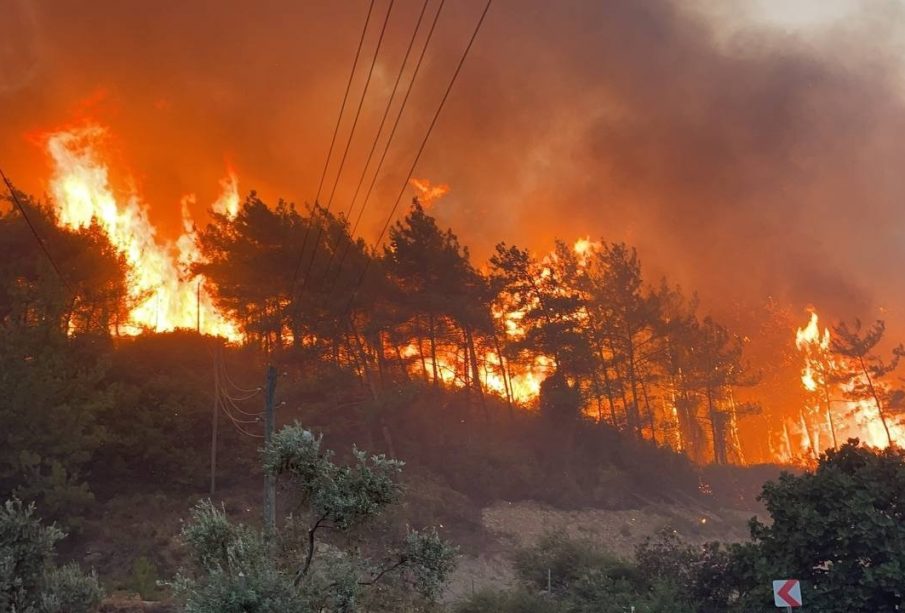 Testing positive to Covid-19 whilst in Turkey was bad enough. What made the situation even more dire were the horrendous fires that have decimated great parts of the country while in that situation.

The end of our ten day quarantine was nearly up when the wildfires exploded in Manavgat, Antalya on 28th July, 2021. The sky was ablaze with smoke, helicopters carrying barrels of water flew consistently overhead struggling to contain the blazes.

My son and I started to cough incessantly not from the symptoms of coronavirus but from the thick smoke that had invaded our lungs as we stood on the balcony of our isolation room wondering if we would need to make a run to the ocean if the flames came any closer.

In fact we had been lucky enough not to suffer any ill effects whatsoever from the virus, however the smoke from the huge inferno perforated our lungs quickly mimicking the chronic coughing that the coronavirus can inflict on its victims and gave us both headaches. The sky was raining ash and the electricity stopped working as the smoke continued to accumulate like a thick, murky flog, blocking the sun on a 42 degree sizzling day to a red blot.

We drenched a towel in cold water and put it under our door keeping an eye on the flames through the window. We had been informed that we were not under any circumstances permitted to leave our room until we tested negative, however was a fire that seemed to be coming closer and closer not a matter of life or death?

With a small backpack filled with our passports and valuables we decided to leave if the situation necessitated it. No one came to check on us. Sirens blazed in the street. We were on our own.

The devastating fires that Turkey has suffered have been a huge blow to the country that was already struggling with the huge financial loss that the coronavirus pandemic has inflicted on its economy.

The fires, which broke out in more than 100 different areas in southern Turkey, have claimed the lives of at least nine people. People have lost their homes, their livestock, some have lost everything they have had.

Huge amounts of animals also perished in the flames or died of smoke inhalation. Vast amounts of forests were flattened and obliterated.

We were lucky, the flames although very close to where we were didn’t come any closer and our worst problem was breathing through the smoke which we could handle more easily by wearing masks.

The doctor who came to perform our test on our last day of quarantine showed us photos of the devastation that had occurred. His best friend had lost his dog, that had been burned to death.

He showed us the villages that had been flattened by the blazes, photos of immense tragedy and suffering that made us weep. He insisted that the blazes had been deliberately lit and that once a blaze was extinguished another quickly took its place, making it impossible for fire fighting efforts to keep up with the arson. He told us how he had been so affected by the number of defenseless animals that had perished in the fires that he was embarking on a five day fire-fighter course to help where he could.

These ferocious fires have however not just been Turkey’s experience in the past few weeks but also that of Greece. Whether or not they are the work of arsonists, these hellish fires coincide with the publication of an alarming new United Nations (UN) climate report.

Tropical cyclones are gaining in strength and the Arctic sea ice is experiencing huge summer reductions with all of these trends on course to worsen.

‘Drastically cutting carbon emissions in the next couple of decades would very likely keep global heating well below 2C’ Valerie Masson- Delmotte, co-chair of the Intergovernmental Panel on Climate Change (IPCC) has said. ‘But if nothing changes, the atmosphere is forecast to warm by 2C by the middle of the century, an event with alarming consequences for the natural world and all life on earth.’

‘It’s just guaranteed that it’s going to get worse… Nowhere to run, nowhere to hide,’ reiterated report co-author Linda Mearns, a senior climate scientist at the US National Center for Atmospheric Research.

UN secretary-general Antonio Guterres has said that the report by 234 IPCC scientists is a ‘red code for humanity.’

‘The alarm bells are deafening, and the evidence is irrefutable: greenhouse gas emissions from fossil fuel burning and deforestation are choking our planet and putting billions of people at immediate risk,’ he stated. ‘Global heating is affecting every region on Earth, with many of the changes becoming irreversible.’

These fires have in fact been so immense that images from Copernicus, the EU’s Earth observation program, have shown that smoke had crossed the Mediterranean and reached Egypt.

Having shallow waters and being semi-enclosed means that the Mediterranean region has warmed much faster in comparison to the worlds other oceans that are also rapidly heating up. In fact the Mediterranean has increased by up to 0.4 degrees Celsius per decade compared to a 0.2 degree rise globally. This region is in fact a literal hotspot for the detrimental effects of the climate crisis.

Is struggling to breathe for lack of pure air going to become a common theme for the future?

Luckily my son and I tested negative on our last day of quarantine and were able to fly home to where we could breathe clean, fresh air something one takes for granted until it is no longer available. We felt extremely blessed we had beaten coronavirus, we hadn’t lost our home, our pet, our livelihood but still we knew that climate change if not urgently addressed and it’s aftermath would eventually affect us the same as it would affect every living being on the planet in one way or another.

The Coronavirus Pandemic has also touched everyone on the planet in other detrimental ways. It has killed millions of people, made many sick, changed our way of life and for many of us made us question what is really important in life.

The next challenge the world needs to combat and fast is that of saving our planet which is our home. The virus has taken up the majority of our time in the last 18 months and no doubt this will continue for some time to come. However we also need to be as strict in saving the earth as we are in saving lives during the Pandemic. How many more humans will die, starve or lose their homes if climate change is not seriously addressed?

We have developed vaccines that have helped us overcome the Pandemic. Now is the time to develop a world-wide strategy to avert potentially the biggest crisis man kind has ever faced.

As the latest UN report shows we are nearly at the end of the many chances we have had. It is now or never. Let’s make the right choice and make it now, a concerted world-wide effort that will benefit us and the other species that dwell on earth.

6 things to be grateful for today