Pig cannibalism and other atrocities filmed undercover at French Farm 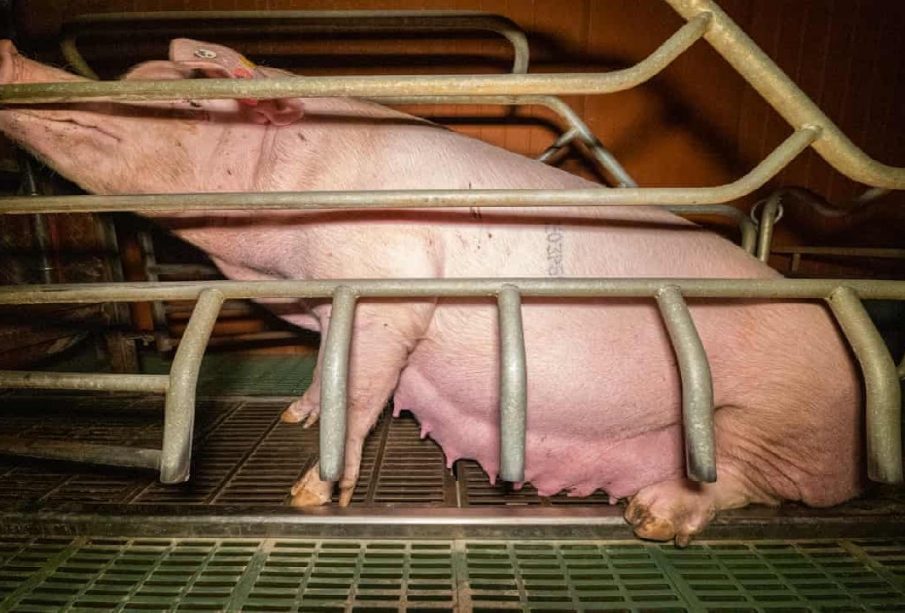 Undercover footage obtained by the French nonprofit animal defense organization L214 has highlighted the shameful and cruel manner pigs are being kept at a French farm that is a supplier for a Nestle-owned brand of frankfurter commonly sold in most major supermarkets.

L214 has announced they will file a complaint against Herta for mistreatment of animals and consumer deception. The Herta Brand which is sold in the United Kingdown (U.K.) supermarkets is 40% owned by Nestle and 60% by Spanish food company Casa Tarradellas.

L214 will base their case against Herta in France using the evidence of undercover videos they obtained in June and September this year, which show the deplorable conditions the animals endure and the filthy environment where they are kept.

The video footage appears to show dead animals lying in pens, pig cannibalism, pigs in overcrowded pens and a harrowing scene where a sow which seems to be struggling to stand in a narrow farrowing crate with no bedding, slips and tramples at least one piglet.

In its press release regarding the matter L214 stated; ‘Contrary to the commitments made by the brand, the images show deplorable conditions for the pigs that do not comply with regulatory requirements. L214 is filing a complaint for mistreatment of the animals against Herta, the most purchased brand in France, and for misleading the consumer.’

Colistin is one of more than 20 pharmaceutical products shown in the video. Colistin, also known as polymyxin E, is an antibiotic medication used as a last-resort treatment for multi drug resistant Gram negative infections including pneumonia.

Waitrose has stated that it does not allow suppliers to use colistin, however the footage obtained shows that this is in this instance the case. The pigs in the video also appear to have had their tails docked, a practice which is forbidden in the European Union (E.U.) except in exceptional circumstances. The pigs and piglets seem to be covered in faeces. Their habitat has no straw or other bedding that can be seen and the sheds fail to provide any natural light. A disturbing image obtained by L214 is reported to show a pig chewing after biting a dead pig’s stomach.

Pig welfare which is governed by E.U. law specifies that they “must have permanent access to “rooting materials” such as straw, hay, wood, sawdust, mushroom compost, peat or a mixture of the stipulated materials.

The organization also reported that ‘In the maternity wards, the sows (…) are locked in cages barely larger than their bodies.’ As we have observed the images, the space is so small that they struggle to get up. Under these conditions, we see that they happen to run over one of their young when lying down’. Hernias “the size of a balloon.” were also observed.

The pigs also appear to endure cruelty on top of the disgraceful environment and barbaric living conditions they experience before they are killed. A worker secretly filmed loading the pigs for slaughter seems to use an electric prod and to hit the pigs backs with a plastic panel. Among other disturbing images, a piglet appears to have its foot trapped in the slatted floor, while one half-escaped sow is trapped by her hips in the bars of her crate.

The animal welfare organization is hopeful that the publication of these images depicting the long drawn out suffering of the pigs from birth to death will encourage the brand to wholly and expressly change their breeding practices.

L214 is also setting up an online petition to rally the owners of the brands, Nestle and Casa Tarradellas to commit to the banning of these practices.

20 Hollywood Actresses you may not have known who are of Jewish ...