COULD SLEEPING WITH A SNORER TRIGGER A HEART ATTACK? 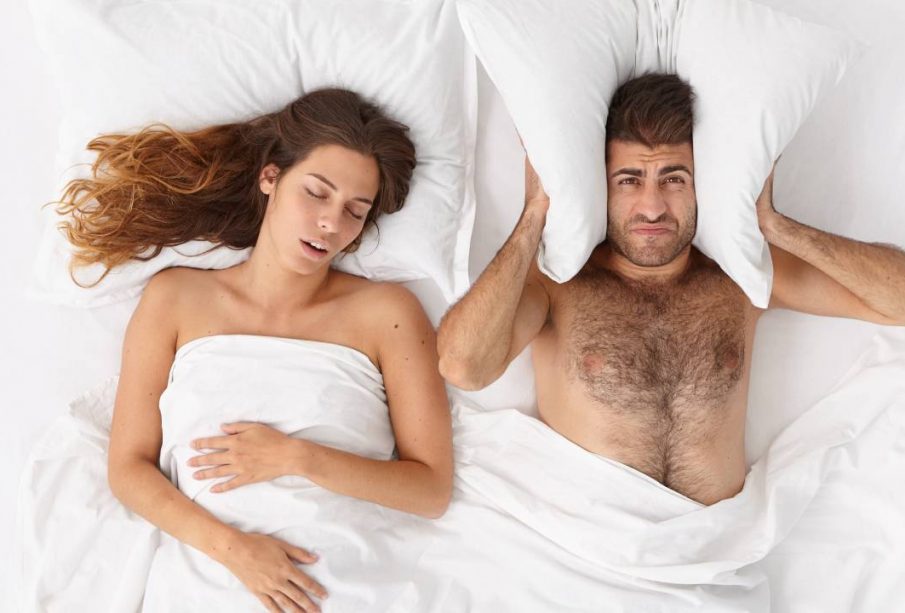 As you blearily make your way out of bed after another night of tortured sleep with your chronically snoring partner, is it just tiredness, grumpiness and the adding of an extra wrinkle the only lousy side effects that will affect your day? Or are the accumulative effects of sleeping with an unrelenting megaphone inducing detrimental long term side effects that could seriously damage your health and well being?

IS SLEEPING WITH A SNORER AN ACT OF LOVE OR STUPIDITY?

In the first throes of infatuation we can be thrilled to sleep with the object of our desire. Nothing seems more romantic, intimate or fulfilling than sharing the same bed with another. After giving up the many benefits of sleeping alone which include sleeping in silence we tend at least in the beginning to sacrifice a full night’s sleep with our snoring partner in the fanciful belief that this is an important part of the relationship that will bring us closer together when in fact in many cases it has the opposite effect. Are the conceived, mainly short term perks of cuddling, spooning and warmth worth the long term effects of severe sleep deprivation and the health risks associated with it? The dangers associates in sleeping with a snorer can range from mild to life threatening. Is it worth gambling your health to fulfill society’s fairytale on how sleeping together is the ultimate bonding experience?

IS SLEEPING IN THE SAME BED EVEN NORMAL?

Sleeping together was not always typical especially among the wealthy. In older times married couples slept in separate rooms, and visited each other when the mood struck. Shared rooms and beds gained popularity as people, especially poorer ones moved to cities where less space led to sharing a room and a bed. Modern concepts pitch the themes of happy couples sleeping together but not being able to sleep due to the snoring of a partner can take its toll on love for even the most besotted who could seriously consider ditching the couple life for a single bed after too many sleepless nights.

Regular poor sleep puts you at risk of serious medical conditions, including obesity, heart disease and diabetes plus it shortens your life expectancy. A good night’s sleep is considered an essential component for a long and healthy life. Sleeping with a snorer has the potential to increase your morbidity and accelerate conditions that could even endanger your life.

Scientists have proven that one in seven snorers make so much noise it can increase a partners blood pressure. John Hopkins school of medicine studied 162 snorers and found that 14 percent of their subjects exhibited decibel levels of 53. According to a 2016 study by researchers based in Germany this is a level that could trigger a heart attack especially if the victim suffers from other pre existing conditions.

A US study found that two thirds of snoring participants reached decibel levels of 45 which for their partners is equivalent to sleeping next to a washing machine. A study on snoring conducted at Queen’s University In Ontario, Canada produced the following conclusions: Four couples with an age range between 35 to 55 were monitored for noise exposure effects over a period of time. It was found that the sound of the snoring no matter how loud did not affect the snorer as much as the partner, this is related to the fact that the brain dampens respiratory interruptions during sleep. However 100% of their partners did suffer the consequences of sleeping with snorers which of one was the equivalent of sleeping with an industrial machine.The partners all experienced a unilateral high -frequency pattern of hearing loss consistent with noise induced trauma.

Research shows that people who sleep with snorers may wake up as often during the night as people with documented sleeping disorders. A Mayo Clinic study reported that partners of snorers woke up partially  an average of 21 times an hour, nearly as much as the 27 times the snorers themselves were awakened by their documented sleep issues. Sleep deprivation due to exposure to snoring also manifests itself in fatigue, sleepiness, memory loss and pain sensation. ‘For some people, sleeping next to a snorer is the sound equivalent of sleeping next to an industrial machine for 10 to 15 years.’ says Dr. Tan, who heads the Department of Otolaryngology at Queens University. The stress of sleeping with a snorer and the accumulative exhaustion and stress can also manifest itself in anxiety and depression.

IN SOME CASES TWO BEDROOMS ARE BETTER THAN ONE

To see how a partner’s snoring could be affecting your health and well being, an idea could be to take a few weeks sleep vacation from one another. A reasonable period of time is required to notice if you feel a positive difference in how you feel without being exposed to the potentially hazardous effects of second hand snoring. While sleeping in a separate room isn’t a romantic experience and not something that all couples want to adhere to in the long term. It can help both partners realize the extent of how disruptive and dangerous their sleep situation is and persuade the snorer to seek help. Some however will embrace the freedom of sleeping alone along with the health advantages and see it as a benefit to their relationship and not an obstacle. If you value your health and relationship and snoring is an issue sleeping alone could be the gold standard in keeping both.