BIDEN BRINGS UP HITLER IN A MORE RESTRAINED YET ROBUST DEBATE 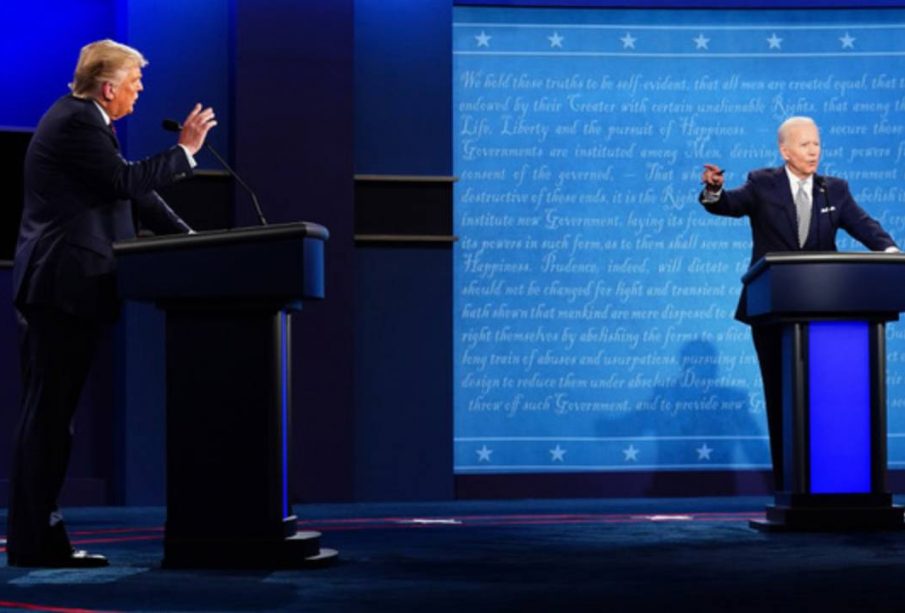 The final Presidential Debate before the upcoming November 3rd, United States Election was due to newly implemented rules a much more cordial coming together of President Donald Trump and Democratic Presidential Candidate Joe Biden. A mute button was employed to stop interruptions to the speaker during their initial time slot on a subject. In the first Presidential debate moderated by Chris Walace, the candidates continually talked over each other with Wallace becoming increasingly exasperated with his inability to control the debate.   The enforced silence rule was introduced to help  the moderator in this instance NBC’s Kristen Welker keep a semblance of control over the proceedings and attempt to allow each Candidates presentation to be audible and completed.

As opposed to Trump’s usual brazen, strong and overpowering manner which was strongly evident in the first debate and received a fair amount of negative feedback, the self restrained and calm demeanor that Trump displayed in the latest debate worked well in his favour. Opponents who were hoping for another display of Trump’s dominating manner would have been sorely disappointed as Trump stuck to the rules (most of the time) and spoke in a concise calm and (for him) tamed manner. Biden kept up a cool facade in the beginning but did start faltering towards the end also making an eye raising comparison to Hitler in response to Trump’s self described relationship with North Korean leader Kim Jong-un. ‘Having a good relationship with leaders of other countries is a good thing.’ Trump said. Biden quickly retorted with ‘That’s like saying we had a good relationship with Hitler before he in fact invaded Europe.’ The interesting and questionable metaphors were not just confined to Biden though with Trump memorably referring to Biden and specifically Biden’s son Hunter (who for all the wrong reasons is making current headlines in regards to his alleged ties with Ukraine and China) as a vacuum cleaner. ‘They are like a vacuum cleaner.’ Trump said in reference to alleged millions that the duo had received. ‘They are sucking up money’ Trump questioned Biden on his apparent involvement in the scheme which involved work Hunter had done in China and Ukraine and his son’s efforts to cash in on his father’s position while his father was the point person in the Obama administration. Since the New York Post disclosed the extensive report on uncovered emails from Hunter Biden, questions have been raised on whether his father had collaborated and benefited from his son’s overseas finances. During the debate Trump had the chance to challenge Biden about recent revelations contained in the emails. Biden himself opened the door to Trump’s interrogation  when he alluded to the subject while criticizing Trump’s lawyer Rudy Guiliani, who had obtained a hard drive that was allegedly from Hunter Biden’s laptop. Welker however did follow up with Biden in regards to his son’s foreign business involvement. ‘Mr Vice President Biden there have been questions about the work your son has done in China and for a Ukranian energy company when you were vice president. In retrospect, was anything about those relationships inappropriate or unethical?’ she asked. Biden unequivacally denied any involvement or knowledge of inappropriateness. ‘Nothing was unethical’ he replied. ‘Here’s what’s the deal, regarding Ukraine, we had this whole question about whether or not because he was on the board, I later learned, of Burisma, a company- that somehow I’ve done something wrong. Yet every single solitary person was going through with his (Trumps) impeachment testifying under oath who worked for him said I did my job impeccably. I carried out U.S. policy not one single solitary thing was out of line. Not a single thing.’ As the mainstream media has mainly chosen not to cover the Hunter Biden Story this was a rare chance for Trump to push the issue under the spotlight to a world audience and gave him the advantage of adding doubt to Biden’s character and alleged underworld associations for financial gain.

On the subject of the Coronavirus Trump himself a coronavirus survivor said that ‘People are learning to live with it.’ Biden countered with ‘People are learning to die with it.’ The two have very different ideas on how the Pandemic should be handled with Biden making it clear that he would support the mainly mandatory wearing of masks and not ruling out lockdowns to contain and control the spread of the virus. Biden asserted that if he is elected he would increase the production of masks and necessary protective equipment plus increase rapid testing, all of which Trump countered with what he says is already being done. Trump’s stance on the handling of the virus is that ‘we can’t lock ourselves up in a basement like he does.. He has this thing about living in a basement.’ and he cited statistics that 99.9 percent of young people recover and 99 percent of people overall. Biden takes a more conservative and careful approach on the handling of the virus whereas Trump believes the damaging effects of continuous lockdowns which bring with them their own side effects of increased domestic violence, suicides and economic ruin ‘make the cure worse than the problem itself.’ Biden puts the blame on Trump for his nonchalant attitude towards COVID-19 that has so far killed over 225,000 Americans and so far despite Trump’s dismissive attitude that things are getting better sees no sign of abating. ‘Anyone responsible for so many deaths should not stay as President.’ Biden strongly stated. Trump pointed out the same arguments that were highlighted from the last debate including his insistence to close American borders despite being highly criticized for the move at the time and pointing out that the United States is not the only country being affected by large numbers of infections. Trump speaks of a vaccine that is coming ‘soon’ while Biden dispels that as an uncertain myth by Trump not yet confirmed.

THE END OF THE AMERICAN OIL INDUSTRY?

As the debate moved onto the subject of climate change, Biden stated that if elected he wouldn’t support giving the oil industry a  federal subsidy labelling it ‘a significant environmental polluter… It has to be replaced by renewable energy over time. Over time.’ Biden said. Trump grabbed on this admission to send a warning to the states this kind of move would affect. ‘Basically what he’s saying is he’s going to destroy the oil industry.’ Trump said. ‘Will you remember that Pennsylvania Oklahoma, Ohio?’ Texas and much of the rest of the country has descended into an economic recession since the Springs huge business shutdowns aimed at controlling the spread of the virus. Experts say however that Texas’ oil and gas industry, which earlier this year saw oil prices dip, could hold the economy back. News that Biden and his party could look to move away from this source of energy could be alarming to those that depend on their livelihood through these avenues. Again as per the first debate Trump and Biden have very different views on how to address the pressures of climate change which the necessary changes needed to reduce emissions could result in further economic disaster for an economy already reeling from the massive job losses and downturn  that the effects of the Coronavirus lockdowns have unleashed. Biden’s positive talk of creating many more jobs from renewable and solar energy and other projects sounds promising but in a time of uncertainty it is not sure if all will be open to changing the familiar to the innovative.

A DIFFERENT FUTURE DEPENDING ON THE WINNING CANDIDATE.

Both Biden and Trump presented well. With their differing stances on the ways to handle the many sensitive and urgent issues their country faces the result lies in the hands of the American people and what direction they want their country to take. It is an important election because the consequences of the outcome will define the next four years. Both Biden and Trump seem determined. The efforts of their determination will be measured after the November 3rd election when one of them will have the task of moving America forward from the divisive issues that have split their country and endeavour to make it whole again.

CLIMATE CHANGE AND PRIORITIES…HOW IMPORTANT IS BREATHING IN COMPARISON TO MONEY?

‘I Voted’ And How! Ireland Baldwin shows topless support for Joe Biden