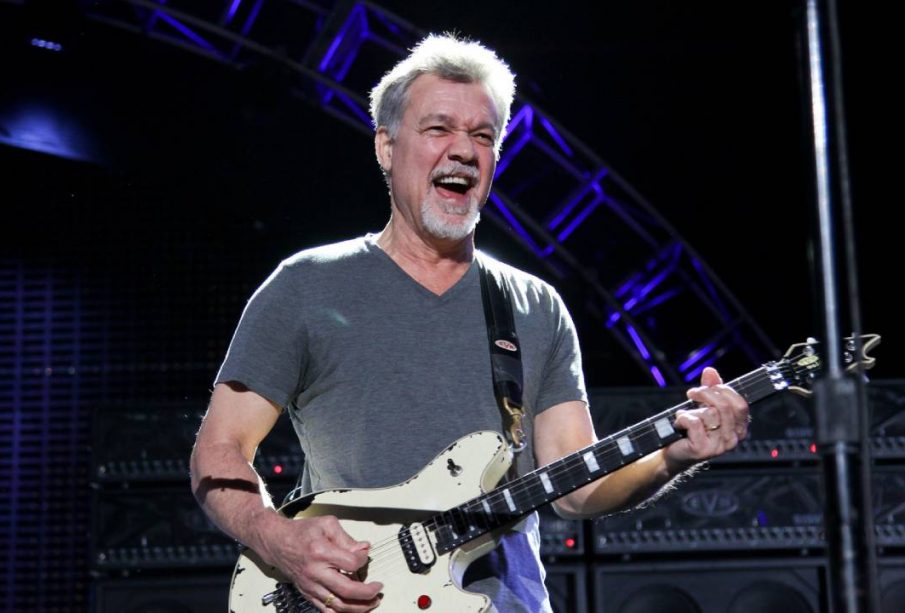 Although he revealed that he had never been able to read music Eddie Van Halen went on to be  named as number 8 in the Rolling Stones tribute of 100 Greatest Guitarists. He was the lead guitarist and main songwriter of the self titled name of his band Van Halen which he formed in 1972 along with his brother, drummer, Alex Van Halen, bassist Mark Stone and singer David Lee Roth. Over four decades, Van Halen released more than a dozen albums with 1984 proving to be their most successful, achieving five times platinum a year after its release.The album included the smash hits Panama, Hot for Teacher and Jump which was the band’s first and only number one hit and earned them a Grammy nomination. Eddie also worked on Michael Jackson’s smash 1982 hit Beat it adding his special flair to the signature guitar solo.

Born in Amsterdam in 1955 Van Halen and his family moved to Pasadena California in 1962. Eddie and his brother Alex were naturalized as U.S citizens and started to learn to play the piano. From 1964 to 1967 Eddie won first place in the annual piano competition held at Long Beach City College. But the piano wasn’t challenging enough for him and while his brother Alex had begun to play the guitar, Eddie turned to drums. He was inspired by his brother however to move on to the electric guitar after hearing Alex’s performance of the ‘The Surfaris’ drum solo in the song ‘Wipe Out’. Speaking in 2015 at a function at Smithsonian’s National Museum of American History, Eddie discussed his life and his version of achieving the American Dream saying, ‘We came here with approximately $50.00 and a piano, and we didn’t speak the language. Now look where we are. If that’s not the American dream, what is?’

Van Halen had struggled with alcoholism and drug abuse starting to drink and smoke at the young age of 12. After entering rehabilitation in 2007 he later shared that he had been sober since 2008. Van Halen had hip replacement surgery in 1999 after his suffering from painful and chronic avascular necrosis that he was diagnosed with in 1995 became intolerable. He then received treatment for tongue cancer in 2000 that included the removal of around a third of his tongue. He was declared cancer free in 2002 however the cancer returned and he finally succumbed to what his son described as ‘a long and arduous battle with cancer.’ On October, 6th. Van Halen’s son Wolf and his mother (Van Halen’s ex wife) Valerie Bertinelli were with him as he died and Bertinelli wrote on Twitter, ‘I’m so grateful Wolfie and I were able to hold you in your last moments. I will see you in our next life my love, You gave me the one true light in my life, our son Wolfgang.’ Wolf Van Halen who had played with his legendary father paid tribute to him ‘He was the best father I could ever ask for’ he said. ‘Every moment I’ve shared with him on and off stage was a gift…. My heart is broken and I don’t think I will ever fully recover from the loss.’

OUTPOURING OF TRIBUTES FOR AN INIMITABLE TALENT

Geeze Butler of Black Sabbath spoke of Van Halen as ‘one of the nicest, down to Earth men I have ever met and toured with .. A true gent and true genius.’ he wrote on Twitter. Gene Simmons of Kiss wrote: ‘Eddie was not only a Guitar God, but a genuinely beautiful soul.’ While Lenny Krevitz said ‘heaven will be electric tonight.’ Van Halen is survived by his second wife, Janie Liszewski, the bands former publicist whom he had been married to since 2009 and his son Wolfgang.

GODS ‘GIFT TO THE LEFT’ RESURRECTS INTO TRUMPS BLESSING!