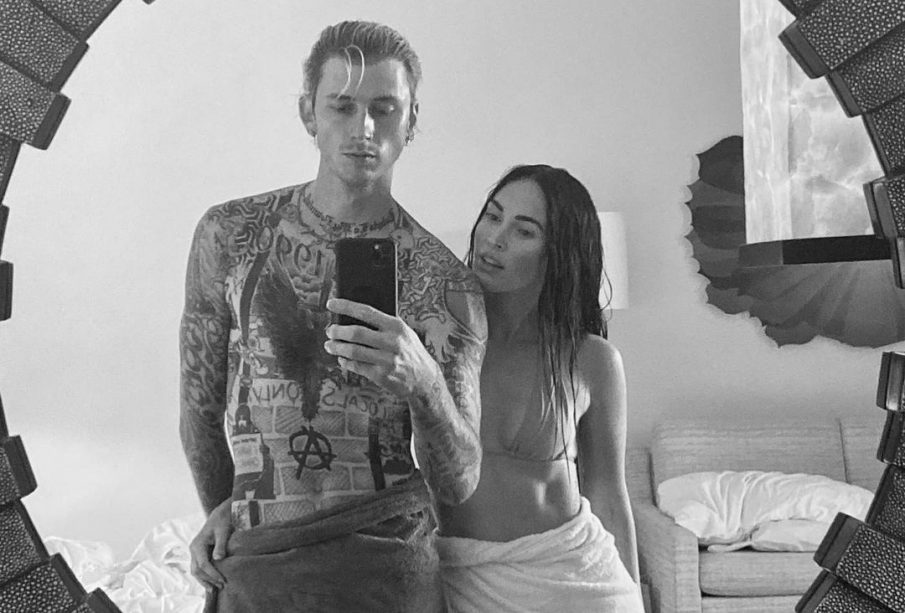 Megan Fox who is still legally married to Brian Austin Green with whom she shares three children is totally enamored with her now love Machine Gun Kelly. Fox and Kelly met in early March on the set of their movie, ‘Midnight in the Switchgrass.’ In an interview Fox explained how she has come to view Kelly as her twin flame. ‘Instead of a soul mate, a twin flame is actually where a soul has ascended into a high enough level that it can be split into two different bodies at the same time,’ she explained in July. ‘So we’re actually two halves of the same soul I think. And I said that to him almost immediately because I felt it right away….. I think it was the second day (of filming) I asked him to come into my trailer for lunch, and I put him through all of this astrology stuff. I went deep right away. I knew before I even did his chart, I said to him, he has a Pisces moon. I could tell by his energy.’

In a recent interview with Nylon Fox disclosed that she was still with Austin Green when she started dating MGK . Rumors of a split began circulating when the couple were viewed exchanging their kids in a a parking lot which gave observers the assumption that they were no longer living together. Austin Green was also seen not wearing his wedding ring.

Speaking of her feelings regarding Kelly, Fox said, ‘I looked into his eyes (and) I felt the most pristine, most gentle, most pure spirit…. Loving him is like being in love with a tsunami or a forest fire. The intensity of merging with him is just overwhelming, and the threat it poses is so powerful but so beautiful that you have no choice to surrender with reverence and with gratitude ,’ Fox told the magazine.

This description of her intense emotions for Kelly has not been commented on by Austin Green. Although he has previously been vocal on social media in regards to their situation, he has stayed as yet silent on the outpouring of Fox’s adulation for her new beau.

Kelly is equally enthusiastic when describing how loving Fox has made him slow down and care for himself more. ‘Love is not what’s being encouraged now.’ he said. ‘In fact, it’s exactly the opposite; Everything now is isolation, dehumanization, separation. And f..k dude, you have in your head that you’re this rock star, with multiple women and all that…So finding someone that can take you out of the fast lane, and make sure that you’re safe, because at any minute you can crash…I love that it can evolve into that.’

Canada needs over 1.2 million workers in the next 3 years.