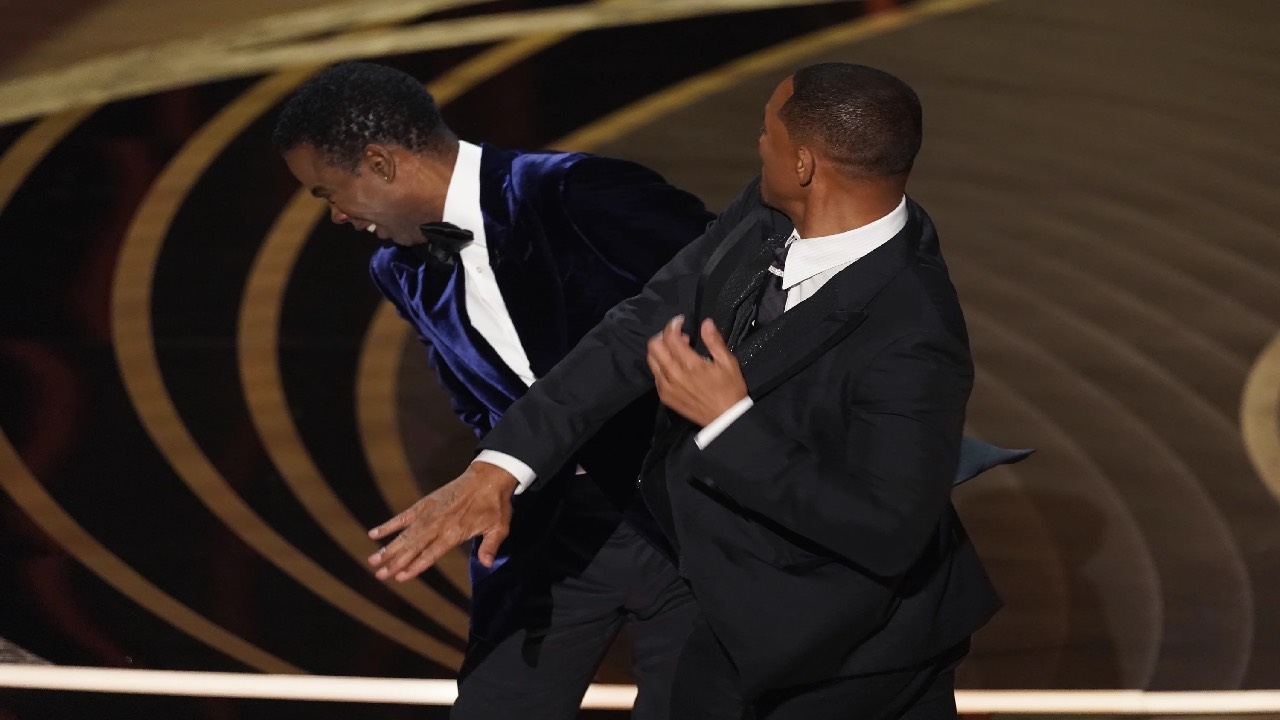 The world was stunned during Sunday’s 2022 Oscar ceremony when actor Will Smith whacked comedian Chris Rock in the face after he made a joke about Smith’s wife, actress Jada Pinkett Smith.

The combustible scene occurred as Chris was on stage to present the award for best documentary and made a joke in regards to Pinkett’s appearance. He compared her lack of hair to actress Demi Moore’s shaved head in the movie G. I, Jane.

Chris Rock’s attempted ‘G.I. Jane’ joke about Jada Pinkett-Smith at the #Oscars comes in poor taste as the actress has been vocal about her journey with alopecia, which caused her to shave her head. pic.twitter.com/aHzOyDCFFw

Jada remained composed but was clearly not amused by Chris bringing attention to her battle with the hair loss condition Alopecia. It is not clear if Rock was aware of Pinketts battle with auto immune disease but either way the joke did not go down well for all in attendance.

Will however made it crystal clear that he was not ‘alright’ with Rock bringing world wide attention to his wife’s illness and unable to control his fury he strode purposefully onto the stage smacking Chris in front of a world wide audience.

#Oscars
Chaos at Oscars Function as #WillSmith Slapped and Cursed Out #ChrisRock on Stage For a Joke About His Wife Jade Pinkett Smith. #uncensoredVersion pic.twitter.com/AktGLr8U4P

After returning to his table Smith yelled out to Rock: “Keep my wife’s name out of your f—–g mouth.”

Later on in the ceremony when Will won Best Actor for his role of playing the father of Venus and Serena Williams in King Richard, he did not allude to Chris and the drama that had earlier occurred. He spoke emotionally about acting out of love and protection, stating that: “Love makes you do crazy things.”

He described the character he had portrayed which seemed to resonate with his feisty reaction to what he saw as an attack on his wife.

“Richard Williams was a fierce defender of his family. I know to do what we do, you gotta be able to take people talk crazy about you, in this business, you gotta have people disrespecting you and you gotta smile and pretend that it’s ok.”

In what could be called a reference to his reaction to Chris’s ‘joke’ he went on to say; “I wanna apologize to the Academy, I wanna apologize to all my fellow nominees… art imitates life. I look like the crazy father, just like they said about Richard Williams, but love will make you do crazy things.”

Stars and fans alike were divided in their reactions to what happened. Some viewed Smith’s defense of his wife as romantic and gallant while others were abhorred by what they viewed as a lack of control on Smith’s part.

Minnie Driver spoke with PEOPLE at the Vanity Fair party and commented on the incident, “I think that we were part of something incredibly personal and it broke my heart. Deeply personal between some people. It was… I don’t know. The world right now, we’re living in high stress times. People feel things incredibly deeply and it’s an expression of that.”

Tiffany Haddish told PEOPLE at the Governors Ball that how she saw it was “a Black man stand up for his wife, which meant so much to me.”

“Maybe the world might not like how it went down, but for me it was the most beautiful thing I’ve ever seen because it made me believe that there are still men out there that love and care about their women, their wives.”

Queen Latifah made no mention of the cut throat moment by keeping a neutral stance and saying, “I love everybody!” She spoke of the ceremony saying that: “It felt alive, there were amazing performances, and it just felt so good to celebrate.”

Some were totally offended by Smith’s behavior including ESPN personality Stephen A. Smith. In a video posted to Twitter he called it a “shameful act” and said he cannot condone violence. “There’s no excuse for that,” he added. “Don’t even try to justify it.”

Smith also tweeted that Will “just stained the greatest moment of his career. You cannot do that S$&@!! Especially as a BLACK MAN in that position, to ANOTHER BLACK MAN (@chrisrock) on THAT STAGE.”

There’s no excuse for that, Will Smith. pic.twitter.com/v8u8PtQRMX

Nicki Minaj, defended Smith’s response. She spoke on Twitter about Pinkett being open about the emotionally devastating effects of losing her hair from the autoimmune disorder alopecia and stated that; “The husband gets a front row seat to his wife’s pain…he’s the 1 consoling her… drying her tears behind closed doors when those cameras go off. Social media has made ppl feel that these ‘husbands’ won’t ever run into them in real life.”

“You just got to witness in real time what happens in a man’s soul when he looks over to the woman he loves and sees her holding back tears from a ‘little joke’ at her expense.”

“This is what any & every real man feels in that instant. while y’all seeing the joke he’s seeing her pain:”

Kathy Griffin was vocal in her condemnation of Smith. “Let me tell you something, it’s a very bad practice to walk up on stage and physically assault a Comedian. Now we all have to worry about who wants to be the next Will Smith in comedy clubs and theaters.”

Mia Farrow’s opinion was that, “It was just a joke. Jokes are what Chris Rock does. Always has been edgy. This was a mild joke for him.”

It was just a joke. Jokes are what Chris Rock does. Always has been edgy. This was a mild joke for him. And i love GI Jane

Richard Marx tweeted a future warning to comedians. “Hey professional comedians: be on notice! From now on, you need to make sure your jokes don’t offend people. Especially extremely attractive, famous and exorbitantly wealthy people.”

Hey professional comedians: be on notice! From now on, you need to make sure your jokes don’t offend people. Especially extremely attractive, famous and exorbitantly wealthy people!

Craig Melvin, Today show co-anchor spoke about the incident on Monday’s show. “If you’re raising a boy, especially in this country, you spend so much time talking to that kid about keeping your hands to yourself, controlling your emotions. And then there’s also this long-held perception in this country that men of color, especially, can’t control their rage and their anger. Just to see someone who was that beloved for decades. It was troubling on so many levels.”

The Academy later released a statement saying: “The Academy does not condone violence of any form. Tonight we are delighted to celebrate our 94th Academy Awards winners, who deserve this moment of recognition from their peers and movie lovers around the world.”